Here’s what you need to know: Firefighters race to contain blazes before storms roll through and the weather heats up again.The authorities are …

Here’s what you need to know:

Firefighters race to contain blazes before storms roll through and the weather heats up again.

Firefighters were making progress against several significant wildfires on Thursday, the authorities in California and Oregon said, though they warned that conditions could allow fires to quickly spread again or start anew around the states.

More than 17,000 firefighters had managed to slow, stall or even diminish some of the major fires in California, Daniel Berlant, a spokesman for the state fire agency, Cal Fire, said. The August Complex, which has burned almost 800,000 acres north of Sacramento, was 30 percent contained, and the North Complex fire, stretching 228,000 acres in Northern California, was 36 percent.

And Californians in the Bay Area were able to enjoy smoke-free skies for the first time in weeks: Thursday was the first day with no “Spare the Air” warning after a record 30 consecutive days.

In Oregon, the Beachie Creek fire east of Salem, which has burned nearly 200,000 acres and forced tens of thousands to evacuate, was 20 percent contained by Thursday morning.

Still, meteorologists said that dry conditions could prime the fires to spread again. A “warming trend” is expected to return to California this weekend, Cal Fire said, with higher temperatures after a relatively cool stretch. 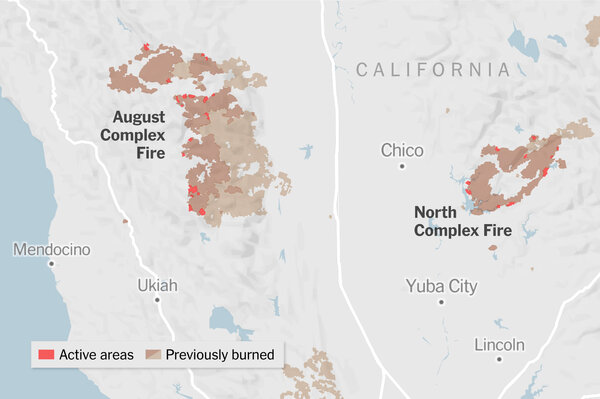 Maps: Fires and Air Quality in California, Oregon and Washington

Where major fires are burning in the Western states and how unhealthy air quality has become.

Dry lightning from thunderstorms posed a threat in Oregon, where vegetation remains dry after weeks of high heat and little rain. Severe thunderstorms were possible in the late afternoon and early evening, the National Weather Service said, and wind gusts up to 60 miles per hour wind and hail up to the size of quarters may accompany the storms.

“That is always concerning because thunderstorms can produce dangerous lighting and gusty winds and even some small hail,” said Brad Schaaf, a meteorologist with the National Weather Service in Medford, Ore.

The storms will move quickly, but the volatile winds, Mr. Schaaf said, make it “hard to predict exactly where the winds would push the fires.”

Some major areas of concern for the thunderstorms include the Cascades and eastern Douglas County, and northward into the Willamette Valley, Mr. Schaff said. He urged residents who were in warning zones to seek shelter. “If you hear thunder, go indoors,” Mr. Schaaf said.

Also on Thursday, emergency teams continued to search for victims and survivors of the fires, which have killed more than 30 people, destroyed thousands of structures and burned across more than five million acres in three states so far.

The authorities are still struggling against misinformation in the fire zone.

The authorities in Western states, still locked in a grueling battle to contain fast-moving fires, struggled to tamp down waves of false rumors and misinformation that have created confusion and fear in communities directly threatened by the flames.

South of Portland, Ore., where the Beachie Creek fire is burning, county leaders pleaded with the public to trust them — about the dangers of fires and their efforts to track down each and every tip.

“I want the public to completely understand that our office has no intelligence or information about any group committing any crimes,” Sheriff Craig Roberts of Clackamas County, Ore., said in a news conference Wednesday evening. “No arrests have been made associated with any group.”

He said that efforts to trace tips often led to rumors started by “a friend of a friend,” sources that detectives could not validate, or passing observations that were spun into wild conspiracies online. In one instance, he said, two people helping evacuees noticed an abandoned gasoline can, and moved it to a safe place away from the fire. Someone called in their activity to the police, who investigated and found “they were trying to do just a good deed.”

He added, emphatically, that there was no evidence linking the fires to anti-fascists or any other group. Deputies had made arrests, he said, mostly of people “taking advantage of citizens in really a difficult time.”

Officials in California made similar warnings, urging people to trust information vetted by the authorities and credible news organizations, and not to spread rumors or jump to conclusions based on details overheard online or police scanners.

The renewed effort to stanch misinformation — coming almost a week after the F.B.I. warned the public about how conspiracy theories sapped precious resources — cast a shadow over progress made against the wildfires themselves. “We’re coming around the corner on this, but it’s still very dangerous out there,” the chairman of Clackamas County, Jim Bernard, said in a statement Wednesday night.

A tale of survival emerges from a mountain town devoured by fire.

They were trapped. As walls of fire and smoke encircled their town and blocked the roads, the last people in Detroit, Ore., trickled onto a boat launch beside a half-drained reservoir — residents and vacationers, barefoot children in pajamas, exhausted firefighters. There were two people on bikes. One man rode up on a powerboat.

Seven miles to the west, one path to safety out of the mountains along Highway 22 was blocked by flaming trees and boulders as the largest of 30 wildfires consuming Oregon raced through the canyons. Thirteen miles to the east, the other way out of town was covered with the wreckage of another seething blaze.

So as a black dawn broke one morning last week, the 80 people trapped in the lakeside vacation town on the evergreen slopes of the Cascades huddled together in a blizzard of ash, waiting for a rescue by air.

Jane James sprawled out on the pavement with her two dogs. Greg Sheppard, a former wildland firefighter, borrowed a phone to call his wife. Some people prayed. Others cried. The children, brushing off the threat, ate Oreos and played in the parking lot.

Firefighters assigned each person a number that would determine who would get on the first helicopter dispatched by the National Guard. They spoke with a matter-of-fact calm, even as some privately began to fear the worst and tried to get messages of love to their families.

Roberto DelaMontaigne, a 25-year-old volunteer firefighter, shoved his personal worries aside as he cleared away bushes to create a fire break. Laura Harris, a volunteer firefighter working alongside her husband, wondered to herself: If the helicopters cannot get in, what would their daughter’s life be as an orphan?

Through the din of wind and rattling trees, the crews could occasionally hear the whirring blades of a helicopter above. On the edge of a makeshift landing circle, with strobe lights to guide choppers in, they continued working by hacking down trees. Then the news arrived over their radios: The helicopters could not land.

Nobody was coming to their rescue.

The fires have devastated populations of endangered species in the West. 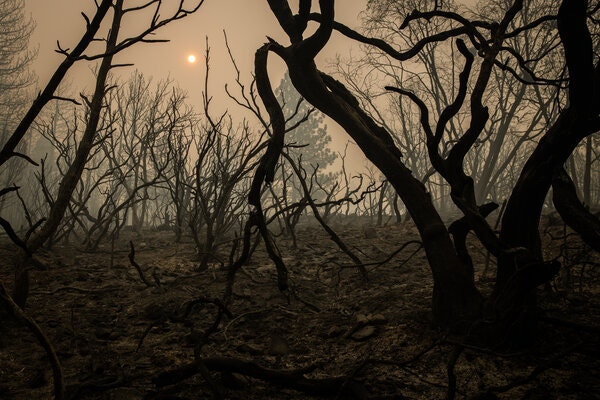 The fast-moving fires that swept through Western United States have wiped out critical populations of endangered species and incinerated native habitats that may take years to recover, if they recover at all.

Fire is a critical part of ecosystems in the West, and many plants and animals depend on it to thrive, but the heat and intensity of the wildfires now ravaging California, Oregon, Washington and other Western states are so destructive that wildlife in some areas may struggle to recover.

“Some of these places we set aside may be fundamentally impacted by climate change and may not be able to come back,” said Amy Windrope, deputy director of Washington’s Department of Fish and Wildlife. “That’s just a reality.”

With millions of acres across the west blackened by fire, the impact on humans has been clear: Lives lost, tens of thousands of people forced to flee their homes, possessions and livelihoods destroyed, and state and federal fire fighting resources have been stretched beyond the limit.

Residents are even beginning to question whether the changing fire danger will make their hometowns too dangerous to inhabit. Less obvious is the long-term impact to native species.

Wildlife officials all over the West are grappling with how to respond now that the existence of habitats set aside for threatened species appear to be imperiled by megafires made worse by climate change.

“It’s important to make the connection between what’s happening now and climate change,” said Davia Palmeri, policy coordinator for the Oregon Department of Fish and Wildlife. “We now have to think about climate change when managing wildlife.”

Fire that raced through the sagebrush steppe country of central Washington this month destroyed several state wildlife areas, leaving little more than bare ground. The flames killed about half of the state’s endangered population of pygmy rabbits, leaving only about 50 of the palm-sized rabbits in the wild there.

“It’s just heartbreaking,” Ms. Windrope said. “We have very little sage brush habitat left for them, and it will take decades for this land to recover.”

The fires also destroyed critical breeding grounds for endangered sage grouse and sharp-tailed grouse, and officials estimate the fast-moving flames may have wiped out 30 to 70 percent of the birds. The survivors are left without the critical brush cover they need to raise young.

Etiketler: And / California / Fire / The / West